Photo Editor is a small but powerful photo editing application

If you have some knowledge of photography, you can do a lot with Photo Editor.
Now use Photo Editor to edit photos on your mobile phone just like you would on a PC. 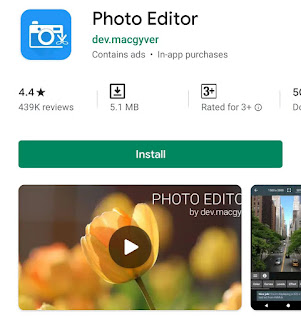 AutoDesk Pixlr is a free photo editor app that has over 2 million combinations of effects, overlays and filters. Using Pixlr, you can create photo collages with various layout, background and spacing options. There is an Auto Fix feature that balances out color. And multiple photos can be layered and blended together.

Camera+ has many sophisticated photo editing tools like touch exposure and focus. There is a Stabilizer shooting mode to help you take sharp photos and zoom up to 6x. One of the best features in Camera+ is called Clarity, which makes intelligent adjustments to improve upon photos even in low light situations. There are many scene modes like Food, Sunset, Night, Portrait and Beach built into Camera+ to ensure you capture shots at the optimal setting.

Camera360 has over 700 million users around the world. This app is especially popular in Asia and has been endorsed by several celebrities. There are more than 200 filters available on the Camera360 app. And you can add some creativity to your photos by using live face effects and stickers.

Darkroom is a photo editing app that has all the bells and whistles that you would expect plus more. Aside from being able to crop, brighten, saturate, fade and add filters, you can also adjust the curves, colors and tones. The Darkroom app also has infinite undo history and custom filter support.

FaceTune is definitely a must-have photo editing app. FaceTune was designed to help you improve selfies and portraits. I definitely could have used this app when I was in high school for my yearbook and prom photos.

As the name implies, Font Candy is a photo editing app that allows you to overlay creative font captions on your photos. If you are having writer’s block, then you can select preset sayings from the app. Font Candy also has scaling and cropping tools that you can use. As demonstrated by the screenshots, this app can come in handy for creating marketing materials and wedding-related graphics.

Flickr has been one of the most popular professional photographer communities since 2004. Yahoo! acquired Flickr in 2005, which enabled the photo social network to scale its growth. There are now over 12 billion photos that have been shared on Flickr. And Flickr offers 1TB of free storage to all of its users. Flick’s mobile app lets you edit photos, add filters and crop images from the camera roll.

Instagram is one of the most popular photo and video sharing mobile applications with over 500 million users. Photos on Instagram can be shared privately or publicly.

Litely is a photo editing app created by a photographer named Cole Rise, who is known for creating filters on Instagram like Amaro, Hudson, Sierra, Sutro and Rise. With the Litely app, you can adjust crop, exposure, sharpness and custom vignetting. There are 66 presets in the shop and new packs are going to be added in future updates.

Microsoft built a solid photo enhancement app for iOS called Microsoft Selfie. Microsoft Selfie considers age, gender, skin tone, lighting and several other variables to enhance your selfies. One of the best features in the Microsoft Selfie app is called Intelligent Portrait Enhancement — which fixes photos up with one click. In dim light situations, the Denoise mode is automatically enabled — which reduces noise by using burst shots. And there is an auto exposure feature that corrects backlit photos.

PicsArt is one of my most favorite mobile photo apps because it has a ton of features. PicsArt has been downloaded over 300 million times thus far and it can be used for editing photos, making collages and drawing. It also has a built-in social network for sharing your photos. Some of the tools it has include crop, perspective, stretch, tilt shift, artistic filters, borders, masks, text, lens flare and speech bubbles. PicsArt is free to download, but it generates revenue by selling additional tools like Love Quotes, Tattoo Fonts and Birthday Frames.