Beranda » Corona » COVID-19 » NEWS » If you avoid 3 installments of calculation / loan, know how much impact you will have to pay

If you avoid 3 installments of calculation / loan, know how much impact you will have to pay

Oleh www.ojasjobs.com
Saturday, April 4, 2020
Join WhatsApp Group
If you avoid 3 installments of calculation / loan, know how much impact you will have to pay. 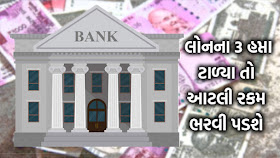 On Friday, RBI Governor Shaktikanta Das had announced a three-month loan moratorium for all term loans, providing a massive reprieve to borrowers. The loan moratorium meant that borrowers would not have to pay equated monthly instalments (EMIs) either for the loan or on the interest for three months.

It was part of the central bank’s attempts to insulate borrowers from the economic fallout of Covid-19 that has forced many small businesses to shut shop, leading to job losses.

0 Komentar untuk "If you avoid 3 installments of calculation / loan, know how much impact you will have to pay"