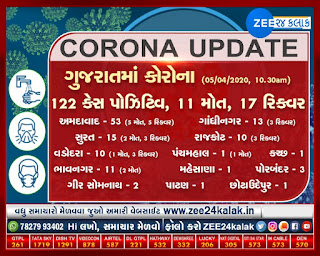 Seven people from Gujarat have been identified in the Nizamuddin Talegh Jamaat-e-Markaz. Up to 103 people were identified till yesterday. One has died while one has undergone a coron-positive test. A total of 110 people have been identified with the seven new people who have been involved in the phase-out. Seven new people are Navasari, state police chief Shivananda Jha said. He further said that action has been taken against those who have returned to Gujarat from Nizamuddin phase after lockdown. Four offenses have been registered against 10 such persons. Of which 2 have been registered in Botad and 1-1 in Navsari-Bhavnagar.